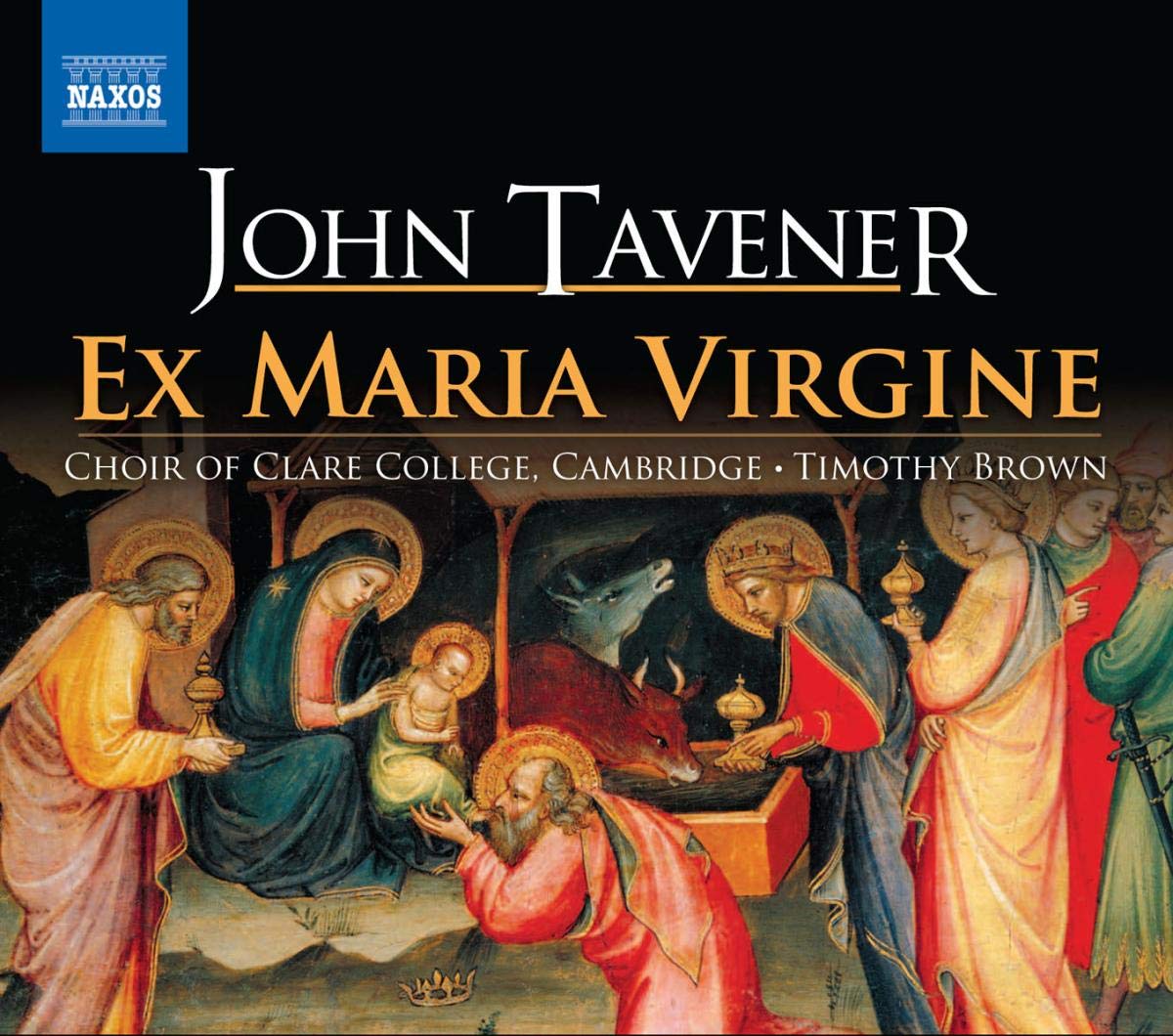 Admired for the sheer beauty of his meditative and mystical music, John Tavener writes of his Ex Maria Virgine, which was dedicated to HRH the Prince of Wales and HRH the Duchess of Cornwall in joyful celebration of their marriage: "I have set both

British composer John Tavener is the big daddy of modern choral composition, save for, perhaps, Arvo Part. Tavener is a deep musical mystic well versed in the Ikons and Kontakions of the Eastern Orthodox Church. A little history for perspective: in the 11th century, two large factions of the Christian church had a difference of opinion resulting in a non-heretical break in the Christian church into the Roman Catholic church, with its headquarters in Rome and the Eastern Orthodox church, with its headquarters shared among the Patriarchies of Constantinople, Alexandria, Antioch, and Jerusalem. It is in the musical tradition of this latter church that John Tavener excels.

Ex Maria Virgine, was commissioned by Timothy Brown in 2005 and the Clare College Choir, Cambridge, who have recorded the selections for the present release. The 10-part piece focuses on the Blessed Virgin, honoring the "Eternal Feminine" as she is honored in Eastern Orthodoxy. Ex Maria Virgine is a difficult piece with flashes of great beauty. Tavener recasts "There is No Rose," "Ding dong Merrily on High" and "Rocking" in jarring fashion. This music is often dissonant and anxious, but relaxes in the final "Verbum Caro."

Tavener's shorter pieces are beautiful. "Birthday Sleep" based on a text by Vernon Watkins, is grand in an ancient style. Tavener soars here. The composer's setting for Yeat's "A Nativity" begins with a darkness that gives way to brightness as the piece unfolds. "O Thou Gentle Light" from the Orthodox liturgy, is the most consonant work and is stunning. Tavener remains, with Ex Maria Virgine the choral composer of note. It is encouraging to realize that music this fine continues to be composed. -- AllAboutJazz.com, Michael Bailey, December 12, 2008

Two of the selections are first recordings: Ex Maria virgine, the major work at 38 minutes, and Marienhymne. The other works are not widely available, for Birthday Sleep was recorded by Stephen Layton (28:4), A Nativity by Matthew Greenall (not issued over here), and Angels by David Hill (23: 2). I cannot find the first recordings of the other two pieces.
Marienhymne is sung in German, while O Thou Gentle Light is sung in Greek (the ancient hymn Phos hilÃ¡ron, which Dom Lucien David also set as a neo-Gregorian chant). The earliest work on the program, Angels, dates from 1985.
The major work is a setting of nine age-old texts in Latin or English separated by a refrain, "Ex Maria virgine," the first movement being repeated at the end. One movement has a Greek refrain, the original of "hail, Mary," but the first word is pronounced "kay-ray" rather than "ky-ruh." The composer has a devoted following, so these accomplished performances will delight them -- Fanfare Archive, J. F. Weber, May/June 2009

Although more common in women, urinary tract infections can also affect men and cause symptoms such as a sudden urge to urinate, pain, and tingling during or just after urination. This type of infection is more common in men over the age of 50 because they are at increased risk of prostatic hyperplasia, those who …

Vaginal bleeding during pregnancy is a relatively common phenomenon that doesn’t always involve something serious, however, it’s important to be evaluated by a doctor as soon as it’s detected, as this can indicate a serious problem. A slight loss of dark pink, red or brownish blood can be normal and result from changes occurring in …

Bleeding pregnancy: reasons and what to do. Read More »

Fiber is a type of carbohydrate that is not absorbed by the body and is found in fruits, vegetables, legumes and cereals. Proper dietary fiber intake is important to maintain gastrointestinal health and prevent health problems such as constipation. In addition, dietary fiber, especially soluble fiber, helps regulate blood sugar and increases satiety, fighting diseases …

Fruits such as papaya, orange and plum are excellent natural laxatives to eliminate constipation, even in people with a long history of this disease, these fruits contain a lot of fiber and water, which accelerates intestinal transit and facilitates the formation of faeces. These fruits can be consumed daily, both fresh and in natural juices …

10 culmination that are herbal laxatives for constipation Read More »

Drinking certain types of tea is a good way to complete the treatment of urinary tract infections, as they can increase the effect of the prescribed medication and relieve symptoms more quickly. However, teas should not replace your doctor’s recommendations, especially when prescribing antibiotics. The most popular teas for urinary tract infections are those that …

Pregnancy cramps are normal, especially at the beginning of pregnancy, as the mother’s body adapts to the baby’s growth, and are also common at the end of pregnancy, around 37 weeks gestation, as they indicate the onset of delivery. However, there are other conditions that can cause strong and persistent pregnancy cramps, and these should …

Pregnancy cramps: 6 main causes and when to worry Read More »

When vaginal discharge has a certain color, odor, is thicker, or has an unusual consistency, it can indicate a vaginal infection such as thrush or a sexually transmitted disease, such as gonorrhea or trichomoniasis. Therefore, when vaginal discharge is not transparent and is white, yellow, green, pink or brown, it can indicate various problems such …

What does another vaginal discharge mean? Read More »

Guaco tea or carrot juice is an excellent natural remedy for coughing, as these herbs have bronchodilator properties, which relieve wet cough and provide relief, in addition, if you have a dry cough, ginger and lemon tea is another good option, such as lemon and ginger. have antiseptic and anti-inflammatory properties. In addition to these …

Mouth ulcers, also called sores, are small lesions that are painful and usually appear on the tongue or lips, can have several causes but are usually related to the consumption of very acidic foods, the first thing to do is to stop eating this type of food, especially acidic fruits. This will reduce irritation and …

Green is not usually a cause for concern, as it is almost always related to food, mainly due to the high consumption of green foods, such as spinach and broccoli, or foods containing green dyes. However, green stools can also be a sign of other problems, such as irritable bowel syndrome or intestinal infections, so …

Green shit: what it does and what to do Read More »